Online version of Alien 3 for Commodore 64. Alien³ is a video game based on the movie sequel of the same name. The plot of the movie picks up directly after the end of Aliens. Ellen Ripley, the main character of the Alien series, is in cryo-sleep aboard the space ship Sulaco. The Genesis Alien³ game is a side-scrolling action game with large maze-like levels. In each level, you have to rescue all the trapped prisoners and then make your way to the exit, all while surviving multiple alien attacks... 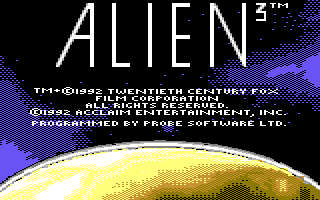 Online emulated version of Alien 3 was originally developed for the Commodore 64 (also known as the C64 or the CBM 64), an 8-bit home computer introduced in January 1982 by Commodore International. Preceded by the Commodore VIC-20 and Commodore PET, the C64 took its name from its 64 kilobytes (65,536 bytes) of RAM. With support for multicolor sprites and a custom chip for waveform generation, the C64 could create superior visuals and audio compared to systems without such custom hardware. The C64 dominated the low-end computer market (except in the UK) for most of the 1980s.