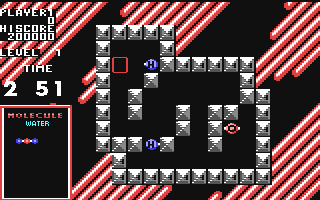 Online version of Atomix for Commodore 64. Atomix is a 1990 2D transport puzzle video game created by Softtouch (Guenter Kraemer) and published by Thalion Software. The object of the game is to assemble molecules from compound atoms by sliding the atoms around. This has to be done in a set time limit for each level. The screen contains a small preview window showing what each molecule should look like. The tile-based playing field contains a number of atom blocks, as well as walls... 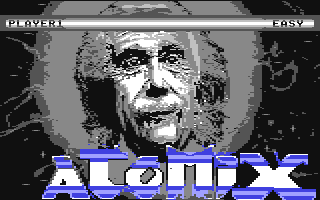 Online emulated version of Atomix was originally developed for the Commodore 64 (also known as the C64 or the CBM 64), an 8-bit home computer introduced in January 1982 by Commodore International. Preceded by the Commodore VIC-20 and Commodore PET, the C64 took its name from its 64 kilobytes (65,536 bytes) of RAM. With support for multicolor sprites and a custom chip for waveform generation, the C64 could create superior visuals and audio compared to systems without such custom hardware. The C64 dominated the low-end computer market (except in the UK) for most of the 1980s.