Online version of 1942 for Game Boy Color. 1942 is a vertically scrolling shooter made by Capcom that was released for the arcade in 1984. It was the first game in the 19XX series. 1942 is set in the Pacific theater of World War II. Despite the game being created by Japanese developers, the goal is to reach Tokyo and destroy the entire Japanese air fleet. The player pilots a Lockheed P-38 Lightning dubbed the "Super Ace". The player has to shoot down enemy planes; to avoid enemy fire, the player can perform a roll or vertical loop. During the game, the player may collect a series of power-ups, one of them allowing the plane to be escorted by two other smaller fighters in a Tip Tow formation. Enemies included: Kawasaki Ki-61s, Mitsubishi A6M Zeros and Kawasaki Ki-48s. The boss plane is a Nakajima G10N... 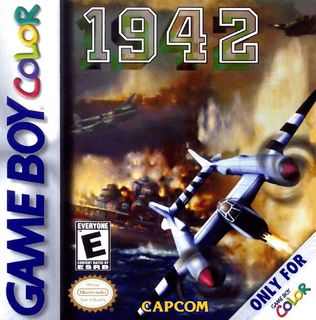 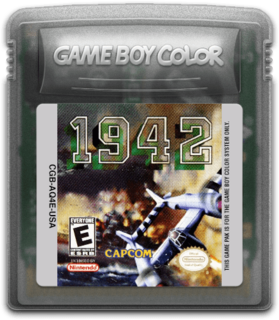 Online emulated version of 1942 was originally developed for Game Boy Color (GBC), an 8-bit handheld game console, manufactured by Nintendo, which was released in Japan on October 21, 1998 and to international markets that November. It is the successor to the original Game Boy and is part of the Game Boy family.
The GBC features a color screen (160x144 px) rather than monochrome, but it is not backlit. It is slightly thicker and taller and features a slightly smaller screen than the Game Boy Pocket, its immediate predecessor in the Game Boy line. As with the original Game Boy, it has a custom 8-bit processor made by Sharp that is considered a hybrid between the Intel 8080 and the Zilog Z80.