Online version of Dragon Quest III (Dragon Warrior III) for Game Boy Color. Dragon Quest III (known in North America as Dragon Warrior III) is the third installment in the Dragon Quest RPG series, first released for the Famicom in Japan. The game uses basic role-playing video game conventions, such as leveling up by gaining experience points and equipping items. Battle is turn-based like the other games in the series. The story follows the traditional Dragon Quest Hero, who is on an adventure to save the world from evil. Putting together a party of assorted classes, the Hero must travel the world, stopping at various towns and other locations, eventually making his or her way to the Demon Lord Baramos's lair... 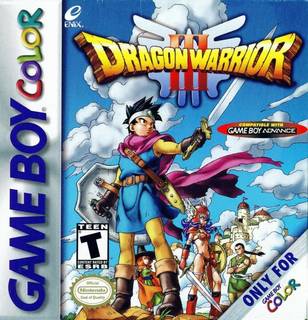 Online emulated version of Dragon Quest III (Dragon Warrior III) was originally developed for Game Boy Color (GBC), an 8-bit handheld game console, manufactured by Nintendo, which was released in Japan on October 21, 1998 and to international markets that November. It is the successor to the original Game Boy and is part of the Game Boy family.
The GBC features a color screen (160x144 px) rather than monochrome, but it is not backlit. It is slightly thicker and taller and features a slightly smaller screen than the Game Boy Pocket, its immediate predecessor in the Game Boy line. As with the original Game Boy, it has a custom 8-bit processor made by Sharp that is considered a hybrid between the Intel 8080 and the Zilog Z80.