Online version of Universal Soldier for Game Boy. Universal Soldier is console conversions of Turrican II for the Mega Drive and Game Boy, produced by The Code Monkeys for Accolade, who had kept the rights for the console ports of the franchise. You control Van Damme's character as he turns against his platoon and attempts to bring down the corrupt government organization that created him. Turrican's sprite was changed into a marine and several other substitutions were made... 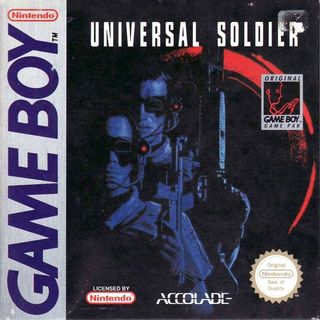 Online emulated version of Universal Soldier was originally developed for Game Boy, an 8-bit handheld game console developed and manufactured by Nintendo. The first handheld in the Game Boy family, it was first released in Japan on April 21, 1989, then North America, three months later, and lastly in Europe, more than one year later. It was designed by the same team that developed the Game & Watch series of handheld electronic games and several Nintendo Entertainment System games: Satoru Okada, Gunpei Yokoi, and Nintendo Research & Development No.1.