Online version of Ax Battler: A Legend of Golden Axe for SEGA Game Gear. Ax Battler: A Legend of Golden Axe is an action-adventure platformer, spin-off of the popular Golden Axe series, released on the Sega Game Gear in 1991. The protagonist is Ax Battler, the male barbarian character from the original Golden Axe game. The series' primary villain, Death Adder, is laying siege to the entire world. He steals the Golden Axe, a magical weapon that grants its wielder unimaginable power, from its hiding place in Firewood Castle. To prevent Death Adder using its powers to destroy the world, the king of Firewood Castle calls upon the help of his strongest warrior: Ax Battler. During his journey, Ax Battler must battle through the following 'special landmarks': The Spooky Cave, Peninsula Tower, Turtle's Back, Death Pyramid, Evil Cave, Maze Wood, Gayn Mountain, Eagle's Back, Ice Cliffs and Death Adder's Castle...

Ax Battler: A Legend of Golden Axe is currently playable only in version for SEGA Game Gear. 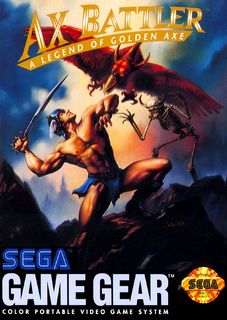 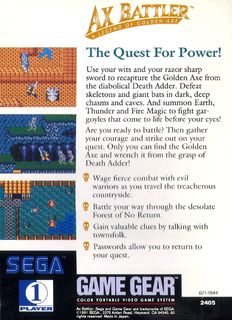 Online emulated version of Ax Battler: A Legend of Golden Axe was originally developed for the SEGA Game Gear an 8-bit fourth generation handheld game console released by Sega on October 6, 1990 in Japan, in April 1991 throughout North America and Europe, and during 1992 in Australia. The Game Gear primarily competed with Nintendo's Game Boy, the Atari Lynx, and NEC's TurboExpress. It shares much of its hardware with the Master System, and can play Master System games by the use of an adapter. Sega positioned the Game Gear, which had a full-color backlit screen with a landscape format, as a technologically superior handheld to the Game Boy. Reception of the Game Gear was mixed, with praise for its full-color backlit screen and processing power for its time, criticisms over its large size and short battery life, and questions over the quality of its game library.