Online version of Dyna Blaster (Bomberman) for TurboGrafx-16/PC Engine. Bomberman title for the TurboGrafx-16. It is a greatly expanded re-imagining of the original one. In Europe, the game was released for the PC, Commodore Amiga and Atari ST, retitled as Dyna Blaster. As White Bomberman, you must defeat the Black Bomberman, who has kidnapped the daughter of the inventor of both him and White Bomberman, and imprisoned her in his giant castle. To do so, you must travel to the top floor of the Black Bomberman's castle, which is crawling with evil monsters and villains that work for him... 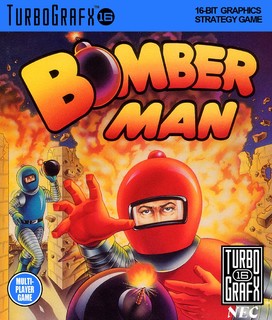 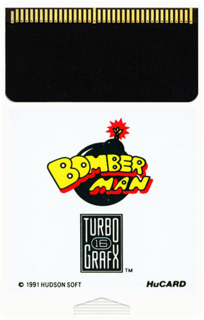 Online emulated version of Dyna Blaster (Bomberman) was originally developed for the TurboGrafx-16 known as the PC Engine in Japan and France, is a 16-bit fourth-generation home video game console designed by Hudson Soft and sold by NEC Home Electronics. It was released in Japan in 1987, and in North America in 1989.
The TurboGrafx-16 uses a Hudson Soft HuC6280 CPU—an 8-bit CPU modified with two 16-bit graphics processors—running at 7.6 MHz. It features 8 KB of RAM, 64 KB of Video RAM, and the ability to display 482 colors at once from a 512-color palette. The sound hardware, built into the HuC6280 CPU, includes a PSG running at 3.58 MHz and a 5-10 bit stereo PCM.
Games were released on HuCard cartridges and later the CD-ROM optical format with the TurboGrafx-CD add-on. The TurboGrafx-16 controller, officially named the TurboPad, features a rectangular shape with a directional pad, two numbered "I" and "II" buttons, two rubber "Select" and "Start" buttons, and two "Turbo" switches for the I and II buttons with three speed settings.