Online version of R-Type for SEGA Master System. R-Type is a side scrolling shoot-em-up arcade game produced by Irem in 1987, first published by Nintendo on Arcade coin-op machines. The player controls a space fighter named the R-9 to defend humanity against a mysterious powerful alien life-form known as the Bydo. The game is made up of several sequential levels, with a boss enemy at the end of each. The player controls a small spacecraft and must navigate terrain and fight enemies using the various ship weapons. The player's spacecraft has, by default, a weak but rapid-firing main gun, which can take out waves of weak fighters; and a more powerful gun called a wave cannon, which requires the player to hold their fire to build up power for the cannon. When released, this fires a concentrated bolt of energy which can do more damage to larger enemies... 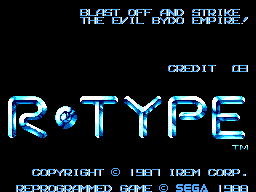 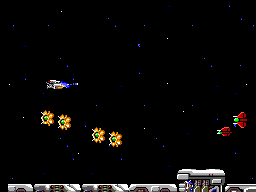 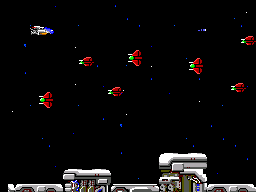 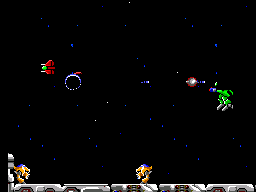 Online emulated version of R-Type was originally developed for the Sega Master System a third-generation 8-bit home video game console manufactured by Sega. It was originally a remodeled export version of the Sega Mark III, the third iteration of the SG-1000 series of consoles, which was released in Japan in 1985 and featured enhanced graphical capabilities over its predecessors. The Master System launched in North America in 1986, followed by Europe in 1987.
The original Master System models use both cartridges and a credit card-sized format known as Sega Cards. Accessories for the consoles include a light gun and 3D glasses that work with a range of specially designed games. The later Master System II redesign removed the card slot, turning it into a strictly cartridge-only system and is incompatible with the 3D glasses.