Online version of Barbarian: The Ultimate Warrior for ZX Spectrum. Barbarian (Death Sword) is a one or two-player fighting game. As the name suggests, the fighters are barbarians. The game offers sword combat in various locales. The game has also a one-player plot mode, where the player has to defeat several fighters to fight evil wizard Drax to rescue princess Mariana. The game was greatly inspired by sword and sorcery fantasy stories like Conan the Barbarian...

You can play Barbarian: The Ultimate Warrior online also in a versions for
PC DOSCommodore 64Commodore 64Apple II 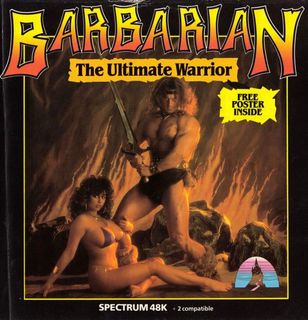 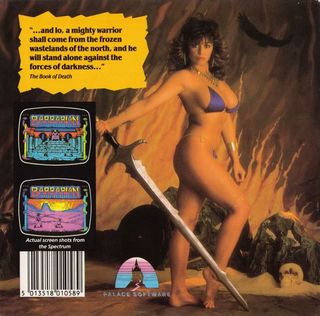 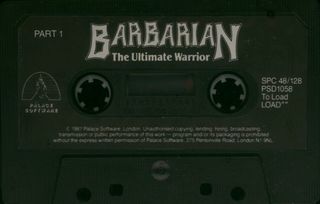 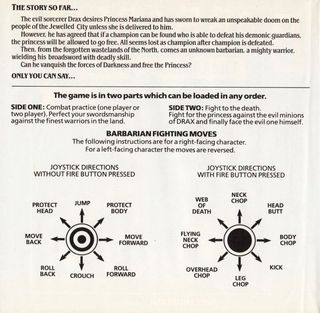 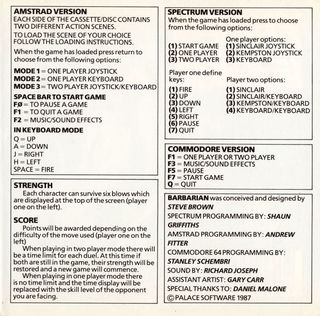 Online emulated version of Barbarian: The Ultimate Warrior was originally developed for the ZX Spectrum an 8-bit personal home computer released in the United Kingdom in 1982 by Sinclair Research. Referred to during development as the ZX81 Colour and ZX82, it was launched as the ZX Spectrum by Sinclair to highlight the machine's colour display, compared with the black and white display of its predecessor, the ZX81. The Spectrum was released as eight different models, ranging from the entry level with 16 KB RAM released in 1982 to the ZX Spectrum +3 with 128 KB RAM and built in floppy disk drive in 1987.
The Spectrum is based on a Zilog Z80 A CPU running at 3.5 MHz (or NEC D780C-1 clone). The original model has 16 KB (16×1024 bytes) of ROM and either 16 KB or 48 KB of RAM. Hardware design was by Richard Altwasser of Sinclair Research, and the outward appearance was designed by Sinclair's industrial designer Rick Dickinson.
Video output is through an RF modulator and was designed for use with contemporary television sets, for a simple colour graphic display. Text can be displayed using 32×24 characters from the ZX Spectrum character set or from a set provided within an application, from a palette of 15 shades: seven colours at two levels of brightness each, plus black. The image resolution is 256×192 with the same colour limitations.