When the first animated intro screen appears, press F1 to proceed, then Space to start the game...

Online version of Boulder Dash for Commodore 64. Boulder Dash, aka Rockford, was originally created by Peter Liepa and Chris Gray. The hero of the game, whom the player controls, is the brave prospector "Rockford". He must dig through caves collecting gems and diamonds, while avoiding various types of dangerous creatures as well as obstacles like falling rocks and the constant danger of being crushed or trapped by an avalanche, or killed by an underground explosion... 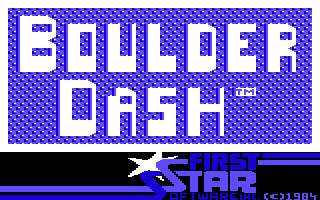 Online emulated version of Boulder Dash was originally developed for the Commodore 64 (also known as the C64 or the CBM 64), an 8-bit home computer introduced in January 1982 by Commodore International. Preceded by the Commodore VIC-20 and Commodore PET, the C64 took its name from its 64 kilobytes (65,536 bytes) of RAM. With support for multicolor sprites and a custom chip for waveform generation, the C64 could create superior visuals and audio compared to systems without such custom hardware. The C64 dominated the low-end computer market (except in the UK) for most of the 1980s.