Online version of Sonic the Hedgehog for SEGA Game Gear. Sonic the Hedgehog is a 2D side-scrolling action platformer developed by Sonic Team and published by Sega for Genesis/Mega Drive home consoles in 1991. The game features an anthropomorphic hedgehog named Sonic in a quest to defeat Dr. Robotnik, a scientist who has imprisoned animals in robots and stolen the powerful Chaos Emeralds. The gameplay centers around Sonic's ability to run at high speed through levels that include springs, slopes, bottomless pits, and vertical loops, involves collecting rings as a form of health, and a simple control scheme, with jumping and attacking controlled by a single button... 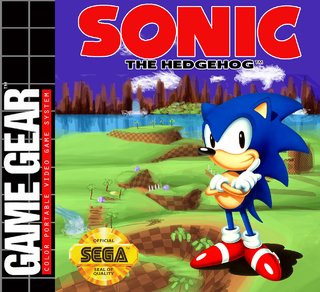 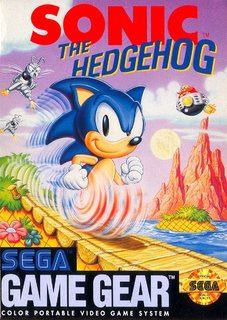 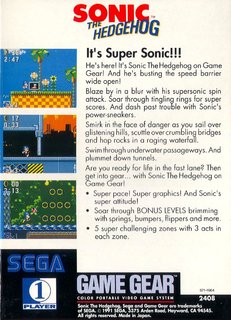 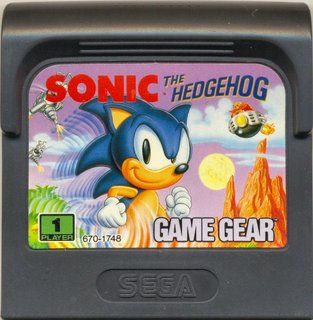 Online emulated version of Sonic the Hedgehog was originally developed for the SEGA Game Gear an 8-bit fourth generation handheld game console released by Sega on October 6, 1990 in Japan, in April 1991 throughout North America and Europe, and during 1992 in Australia. The Game Gear primarily competed with Nintendo's Game Boy, the Atari Lynx, and NEC's TurboExpress. It shares much of its hardware with the Master System, and can play Master System games by the use of an adapter. Sega positioned the Game Gear, which had a full-color backlit screen with a landscape format, as a technologically superior handheld to the Game Boy. Reception of the Game Gear was mixed, with praise for its full-color backlit screen and processing power for its time, criticisms over its large size and short battery life, and questions over the quality of its game library.