Online version of Star Wars (1991) for SEGA Game Gear. Star Wars is an action platformer based on the 1977 film of the same name, released in 1991 for Famicom/NES console. The game follows a sequence of events close to the storyline of A New Hope, where Luke Skywalker has to pilot a landspeeder around Tatooine, collect R2-D2 from the Sandcrawler, Obi-Wan Kenobi from a cave, and Han Solo from the Mos Eisley bar, while fighting stormtroopers, sand people, and many other different enemy characters from the movies. After assembling all the characters, the player navigates the Millennium Falcon in a first-person perspective through an asteroid field to the Death Star... 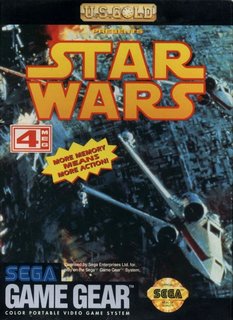 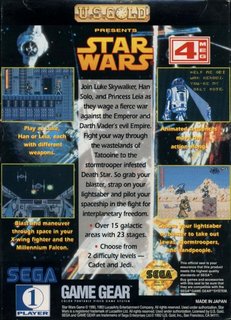 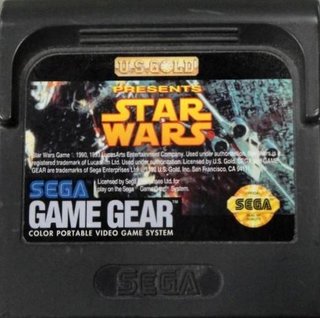 Online emulated version of Star Wars (1991) was originally developed for the SEGA Game Gear an 8-bit fourth generation handheld game console released by Sega on October 6, 1990 in Japan, in April 1991 throughout North America and Europe, and during 1992 in Australia. The Game Gear primarily competed with Nintendo's Game Boy, the Atari Lynx, and NEC's TurboExpress. It shares much of its hardware with the Master System, and can play Master System games by the use of an adapter. Sega positioned the Game Gear, which had a full-color backlit screen with a landscape format, as a technologically superior handheld to the Game Boy. Reception of the Game Gear was mixed, with praise for its full-color backlit screen and processing power for its time, criticisms over its large size and short battery life, and questions over the quality of its game library.