Online version of Ghosts 'n Goblins for Game Boy Color. Ghosts 'n Goblins (Makai-mura) is a run and gun platform game created by Tokuro Fujiwara and developed by Capcom, released in arcades on September 19, 1985. The series has subsequently been ported to and released on a variety of game consoles and mobile platforms and spawned several sequels and spin-offs. The player controls a knight, named Sir Arthur, who must defeat zombies, ogres, demons, cyclopes, dragons and other monsters in order to rescue Princess Prin-Prin, who has been kidnapped by Astaroth, king of Demon World. Along the way the player can pick up new weapons, bonuses and extra suits of armor that can help in this task. The player can only be hit twice before losing a life. Losing a life will result in having to restart the level, or starting at the halfway point if the player has managed to get that far... 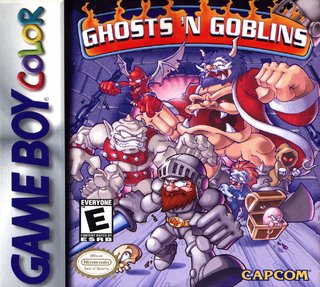 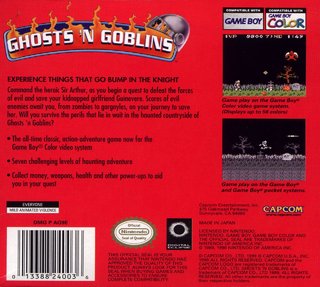 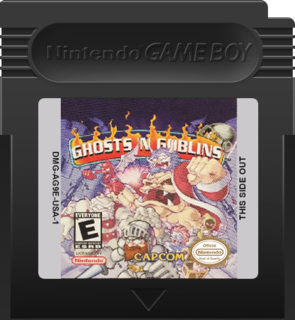 Online emulated version of Ghosts 'n Goblins was originally developed for Game Boy Color (GBC), an 8-bit handheld game console, manufactured by Nintendo, which was released in Japan on October 21, 1998 and to international markets that November. It is the successor to the original Game Boy and is part of the Game Boy family.
The GBC features a color screen (160x144 px) rather than monochrome, but it is not backlit. It is slightly thicker and taller and features a slightly smaller screen than the Game Boy Pocket, its immediate predecessor in the Game Boy line. As with the original Game Boy, it has a custom 8-bit processor made by Sharp that is considered a hybrid between the Intel 8080 and the Zilog Z80.