Online version of Frogger for Game Boy. Frogger is a 1981 arcade game developed by Konami and originally published by Sega. Frogger was positively received as one of the greatest video games ever made and followed by several clones and sequels. The game found its way into popular culture, including television and music. The object of the game is to direct frogs to their homes one by one by crossing a busy road and navigating a river full of hazards. The game starts with three, five, or seven frogs, depending on the settings used by the operator. Losing them all ends the game. The only player control is the 4 direction joystick used to navigate the frog; each push in a direction causes the frog to hop once in that direction. Frogger is either single-player or two players alternating... 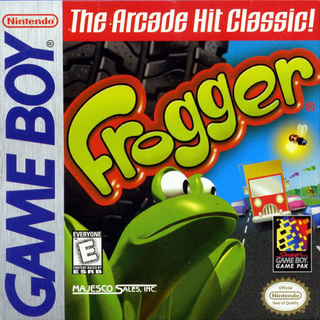 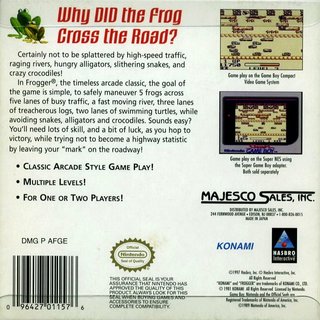 Online emulated version of Frogger was originally developed for Game Boy, an 8-bit handheld game console developed and manufactured by Nintendo. The first handheld in the Game Boy family, it was first released in Japan on April 21, 1989, then North America, three months later, and lastly in Europe, more than one year later. It was designed by the same team that developed the Game & Watch series of handheld electronic games and several Nintendo Entertainment System games: Satoru Okada, Gunpei Yokoi, and Nintendo Research & Development No.1.