Ninja Gaiden for Game Gear was released in Japan, North America and Europe in 1991, this game was not very close to any of the other Ninja Gaiden games. It featured a smaller screen size, bigger character sprites, slower game speed, and unlike the NES and Master System games which were more oriented to platforming action, this was more a linear side-scrolling game.

Online version of Ninja Gaiden for SEGA Game Gear. Ninja Gaiden, released in Japan as Ninja Ryūkenden (Legend of the Ninja Dragon Sword) and as Shadow Warriors in Europe, is a side-scrolling cinematic action-platformer. Tecmo developed and published it for the NES; its development and release coincided with the beat 'em up arcade version of the same name. The story follows a ninja named Ryu Hayabusa as he journeys to America to avenge his murdered father. There, he learns that a person named "the Jaquio" plans to take control of the world by unleashing an ancient demon through the power contained in two statues. Featuring platforming gameplay similar to Castlevania, players control Ryu through six "Acts" that comprise 20 levels; they encounter enemies that must be dispatched with Ryu's katana and other secondary weapons... 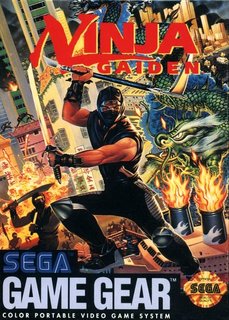 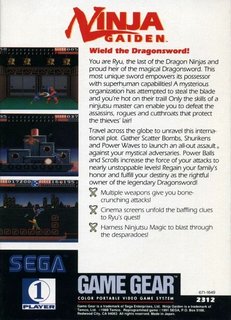 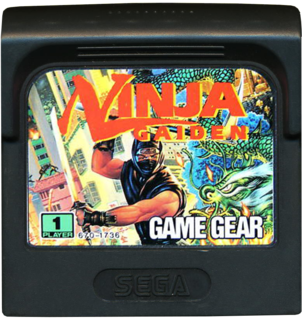 Online emulated version of Ninja Gaiden was originally developed for the SEGA Game Gear an 8-bit fourth generation handheld game console released by Sega on October 6, 1990 in Japan, in April 1991 throughout North America and Europe, and during 1992 in Australia. The Game Gear primarily competed with Nintendo's Game Boy, the Atari Lynx, and NEC's TurboExpress. It shares much of its hardware with the Master System, and can play Master System games by the use of an adapter. Sega positioned the Game Gear, which had a full-color backlit screen with a landscape format, as a technologically superior handheld to the Game Boy. Reception of the Game Gear was mixed, with praise for its full-color backlit screen and processing power for its time, criticisms over its large size and short battery life, and questions over the quality of its game library.