Sega Master System version of Ninja Gaiden, created by Sega in 1992 with license from Tecmo. It stars Ryu Hayabusa and is part of the Ninja Gaiden series, although it features a plot not connected to any of the other Ninja Gaiden games. Due to the discontinued support of the console in Japan and North America because of its poor sales in both regions, the game was only released in Europe and other PAL territories, bearing the Ninja Gaiden label instead of the Shadow Warriors one that usually was used for the series by the time in PAL releases.

Online version of Ninja Gaiden for SEGA Master System. Ninja Gaiden, released in Japan as Ninja Ryūkenden (Legend of the Ninja Dragon Sword) and as Shadow Warriors in Europe, is a side-scrolling cinematic action-platformer. Tecmo developed and published it for the NES; its development and release coincided with the beat 'em up arcade version of the same name. The story follows a ninja named Ryu Hayabusa as he journeys to America to avenge his murdered father. There, he learns that a person named "the Jaquio" plans to take control of the world by unleashing an ancient demon through the power contained in two statues. Featuring platforming gameplay similar to Castlevania, players control Ryu through six "Acts" that comprise 20 levels; they encounter enemies that must be dispatched with Ryu's katana and other secondary weapons... 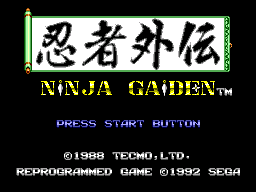 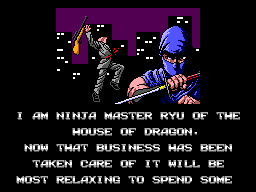 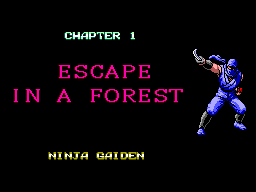 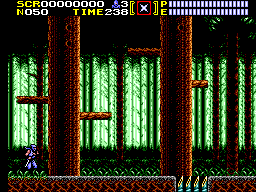 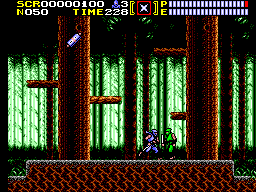 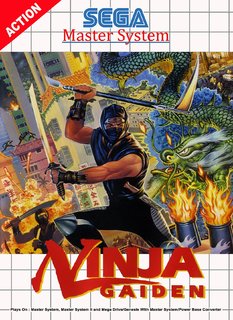 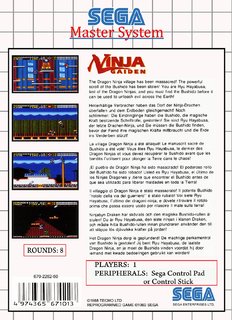 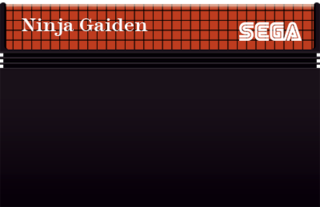 Online emulated version of Ninja Gaiden was originally developed for the Sega Master System a third-generation 8-bit home video game console manufactured by Sega. It was originally a remodeled export version of the Sega Mark III, the third iteration of the SG-1000 series of consoles, which was released in Japan in 1985 and featured enhanced graphical capabilities over its predecessors. The Master System launched in North America in 1986, followed by Europe in 1987.
The original Master System models use both cartridges and a credit card-sized format known as Sega Cards. Accessories for the consoles include a light gun and 3D glasses that work with a range of specially designed games. The later Master System II redesign removed the card slot, turning it into a strictly cartridge-only system and is incompatible with the 3D glasses.